A month or so ago, I had dinner with a group of entrepreneurs at the Goldman Internet Conference in Vegas.  Among them was Travis Kalanick, the colorful and talented Founder/CEO of Uber.  Travis is a man on a mission to revolutionize how we get around, as I’m sure you’re all well aware.  I’ve been a customer from the early days of Uber Seattle, but I really only used it as a Taxi replacement – once a week on a Saturday night out and the occasional trip to the airport.

At dinner, Travis tried to convince me that Uber was changing home values in certain neighborhoods based on ease of Uber access.  I need to speak with Zillow’s Chief Economist, Dr. Stan Humphries, about using Uber availability as an input into the Zestimate algorithm, but I’m a little dubious.

That said, Travis did convince me to get rid of my car.

For the 3rd week of December, I hid my keys and used nothing but Uber.  Everywhere.  To and from work.  To pick the kids up from basketball practice.  Last minute Christmas shopping.  Out to dinner.  The Seahawks game.  Everywhere. 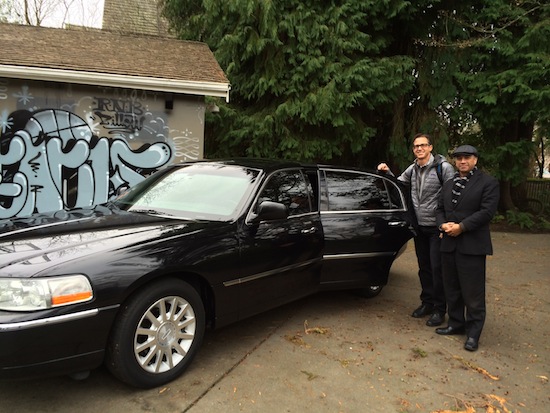 Uber driver, Erick, and me at my garage tagged by street artist, Reach

Am I going to get rid of my Mustang?  Probably not.  I love to drive and I don’t really have to make this tradeoff from an expense perspective.

But I will tell you this: I do now feel Uber is my own personal driver, and I’d guess 50% of my car trips are now Uber rides.

Travis conceived of and is leading nothing short of a transportation revolution.  Well done.

In October, I took a trip to Kuala Lumpur, Malaysia where I had the honor of delivering a keynote address at the Fourth Annual Global Entrepreneurship Summit.  I realized I hadn’t shared enough about this enlightening and rewarding experience that brought together more than 3,500 entrepreneurs from more than 130 countries.

I didn’t know about the GES until I met U.S. Secretary of Commerce Penny Pritzker on a visit she made to Seattle Year-Up, a non-profit that helps young adults across the opportunity divide where I am a board director.  She explained to me that GES was created by President Obama in the wake of the Arab Spring as a forum to help export American-style startup capitalism to rising economies throughout Asia, North Africa, and the Middle East.  I’m a happy evangelist for entrepreneurship, I’d never been to Malaysia, and I knew that if the dates were right, I could lure an Australian surfing pal on a quick surf strike in Indonesia before the summit.  So, when the invitation came, I happily said yes, sent my lonely blue suit to the dry cleaners, and started watching swell forecasts on MagicSeaweed.com.

The U.S. delegation in Malaysia was well represented by Secretary of State, John Kerry and Secretary Pritzker.  Secretary Kerry kicked off the Summit and included a video message from President Obama.  I had a great time creating and delivering my speech called “Power to the People” in which I talk about the common thread of consumer empowerment and marketplace transparency that runs through so many of my startups.  I also talked about how important Good Government is in creating a healthy startup eco-system.

In addition to my speech, I was invited to participate in multiple events that exposed me to a large number of the young entrepreneurs participating from all corners of the globe.  This included participating in a press conference and round table with Secretary Pritzker, as well as judging the final competition of the Global Startup Youth, possibly my favorite part of my 3 days.  Global Startup Youth brought 500 young people, ages 16-25, from around the world and broke them into 50 teams.  Each team had 48 hours to dream up and build a smartphone app and then present it in Shark Tank-like competition in front of the crowds.  I did my best to be a more sensitive Mark Cuban.  The raw energy and creativity coming out of the summit was truly awesome.  I admit that I found myself sneaking out of the dignitary dinners with the guys in suits to find the Malaysian satay buffets that fueled the kids in t-shirts and flip-flops.

The rise of entrepreneurship in this part of the world feels like destiny to me, as long as some modicum of political stability predominates.  I was reminded that none of us should take Good Government for granted.  One that does its best to make sure the entrenched don’t tilt the playing field so steeply that new company creation is fruitless.  In my speech, I talked about the important ingredients of a thriving ecosystem, and the first and most critical ingredient is Good Government.  It is the soil in which our startups grow, fed by the sunshine of money and a river of talent coming out of our educational system.  Despite frustration at times, we in the U.S. owe a great deal of our own business success to an unusually fair and transparent government.

As our world gets ever smaller and entrepreneurial spirit breaks through the binding chains of some of these legacy infrastructures that have stifled innovation and competition, inspiration and innovation will rise.  In fact, I had the opportunity to look into the eyes of those making it a reality.  Whether as a fellow entrepreneur, investor, educator, media representative, or government official, I highly recommend plugging in to the global rise of entrepreneurship.  I came back from my trip energized and happy.  The waves in Indonesia may have had a little to do with that, too.

My favorite speaking gigs are ones where I can have real-life conversations on stage with peers, journalists, and the audience.  One such event was the most recent Geekwire Summit in Seattle.  Even better was this conversation wasn’t just with me, but included my good friend Bill Gurley from Benchmark.  I joined Benchmark as a Venture Partner after I left Expedia and have had the pleasure of working with Bill and the rest of the team for years.  Bill is the rare wicked smart guy who can also communicate his analyses and opinions through compelling analogies and in with a “hat in hand” Texan’s drawl.  Check out his influential blog, Above the Crowd.  He’s added huge value on the boards of several of my companies.

I appreciate John Cook, Todd Bishop and Jonathan Sposato for creating the great forum to have such a fun and lively dialogue.  Let’s all help make the Geekwire Summit a northern rival to Techcrunch Disrupt.  John posted about the conversation on Geekwire, and you can see the full replay below.